Sure, Albuquerque—or Burque as the locals like to call it—spreads out seemingly forever in a metropolis of “just” 900,000. Believe me, I’ve experienced it, driving from place to place and suffering interminably long, unsynchronized lights. You can view the sprawl by hiking, driving or taking the world’s second-longest tram to the top of the overlooking Sandia Mountains; the nearby cliffs make a good sunset photograph.

Despite the auto focus, there are lots of bike and foot trails both in the hills and urban areas, helping Albuquerque earn Men’s Fitness magazine’s fittest U.S. city in 2007. The preponderance of low-rise adobe-style buildings is also charming, especially in quiet neighbourhoods. Visitors from around the world flock here in early October for the Albuquerque International Balloon Fiesta. With more than 600 hot-air balloons, it’s the world’s biggest such festival.

Of course, Albuquerque is outshone by its much smaller but funkier neighbour Santa Fe. But spread throughout the city, you’ll find plenty of fine places to eat, especially those featuring New Mexican cuisine.

It’s the noon rush hour, and Golden Crown Panaderia is slamming busy. People are lined up deciding whether to order a pizza, a meat and cheese sandwich, a big salad or just some puffy loaves of bread and treats from the bakery. I don’t mind, as it gives me time to watch the staff scurrying around and to admire the old, festive adobe building and Christmas lights in the glassed-in porch. My personal-sized pizza is a delightful, four-slice lunch, highlighted by the blue corn crust I’ve chosen over the standard green chile dough.

Hey, it’s New Mexico, so of course I have to go for the blue-corn crust on this little pizza gem at Golden Crown Panaderia

It’s not often I enjoy a fine meal and wish I’ve ordered something else. But such is the case at *Taqueria Mexico, a tiny, colourful place where you squeeze into an available table or grab a free stool. In my defense, it’s the second lunch I’ve had in an hour (I’m doubling up on road-food research), and a couple of loaded tacos (asada/grilled beef and crispy seafood) is the perfect, large snack for just over $4. But then I make the mistake of looking around me and spotting a couple of customers picking the flesh off a nicely grilled, whole Mojarra fish. Across the way, a guy and a girl are digging into coctels de camaron, large glass goblets stuffed with lime-marinated shrimp in a Clamato base. The highlight is watching the guy crush at least half a dozen packages of crackers into his soupy cocktail, turning it into a bready stew.

Located in an old two-car garage, Michael Thomas Coffee makes a fine, albeit somewhat pricy Americano. It helps that they roast their own beans, right behind the espresso machine, and are well versed in pulling their shots. They also sell a range of coffee-making systems from Aeropress to Chemex and Clever brewers, though they don’t make handcrafted drip coffees—something about it taking too long. On a warm Albuquerque afternoon, it’s nice to sit under an awning in the courtyard and watch folks go to and from neighbouring new-age health businesses. 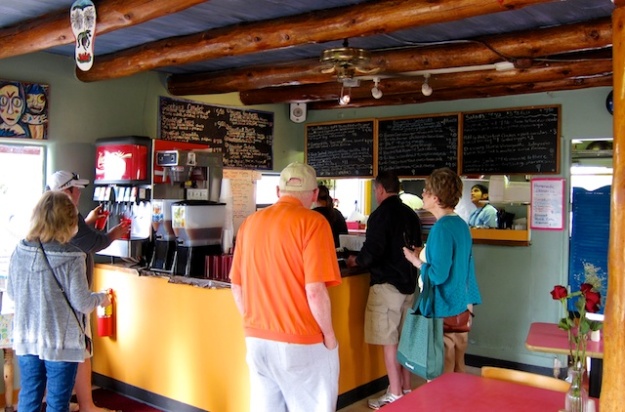 Colourful *Sophia’s Place is in a little, wood-beamed old adobe building, with crowded counter service and bathrooms out back. It’s a great spot for Mexican-themed breakfasts such as tacos and quesadillas (both somewhat unusual in the a.m.), along with standards like big burritos and huevos rancheros. But I’m here for the weekend special of heavenly blue corn pancakes, topped with strawberries, blackberries and, the piece de resistance, piñon nut butter; a plentiful half order of two cakes is only $5. Sophia’s also serves lunch and dinner. Look for the duck enchiladas, at night, when they have them. 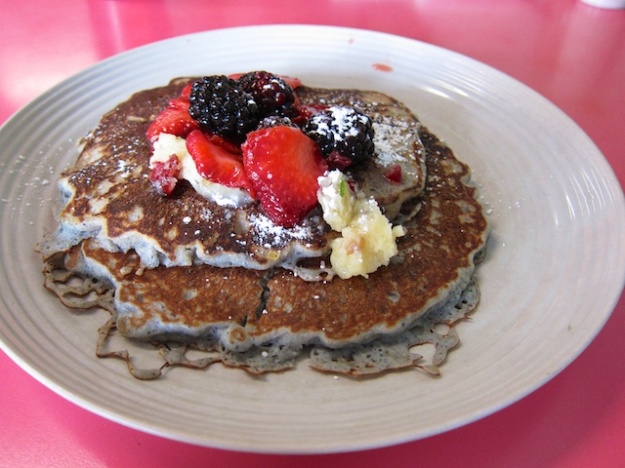 The Grove Cafe & Market is a more upscale place, with better-groomed customers and somewhat higher prices for breakfast and lunch. But the payoff is quality ingredients and good execution in a relaxed, spacious environment. For example, the chef makes daily small batches of mozzarella, which can be savoured in an olive-bread sandwich accompanied by local tomatoes, arugula and basil ($10). At breakfast, fresh fruit is mounded on the pancakes and comes in a small dish with my poached eggs, perched above lovely, thin slices of toasted sourdough ($6.75). The breakfast sandwich features a thick layer of freshly scrambled egg, squeezed into a house-made English muffin, also for under $7. Oh, and the coffee is Intelligentsia.

I previously mentioned the *Guava Tree Cafe as one of my favourite sandwich places on a recent road trip. It features Cuban-style sandwiches and Venezuelan arepas, featuring an unleavened corn-meal bread. My pernil sandwich is a fantastic mix of slow-roasted pork, sweet caramelized onion, Swiss cheese and garlic sauce, prepared by a whirling dervish of a cook. Add a side of yuca crisps and a coconut flan for dessert, and I’ve got a full Caribbean dining experience.

The pernil sandwich is the bomb at Guava Tree Cafe

Is it just me, or are some microbreweries just hard to find, located in an obscure spot that’s easy to drive past, especially at night, and even before you’ve had a pint? Fortunately, the effort to get to Nexus Brewery is well worth it. With my first sip of their malty Scottish ale, I’m transported to the Highlands. It’s one of about 10 ales and stouts available in the long taproom, with lots of patio seating and a garage door that opens on warm evenings. Chase your brew, if you wish, with something to munch on. I’d recommend the chopped pork sliders or the signature fried pickles.

Frontier Restaurant is definitely an Albuquerque institution, across the street from the University of New Mexico. It’s built for the masses, sprawling over five rooms and taking orders at up to eight stations. A green light goes on when a station comes open, and your order number is called out over an intercom when the food is ready, usually in scant minutes. Frontier has something for everyone, at nearly any time of the day or night. Want eggs at suppertime or enchiladas after midnight? No problem. New Mexican food? All the bases are covered, as they are for American standards like burgers and sandwiches. I’m here mostly for the spectacle and thus just order a small, well-flavoured bowl of posole, a thick soup featuring pork and hominy (hulled corn kernels), which along with a large tortilla sets me back $2.05. Frontier definitely isn’t fancy, but the food is cheap and plentiful, and the place is dripping with character. 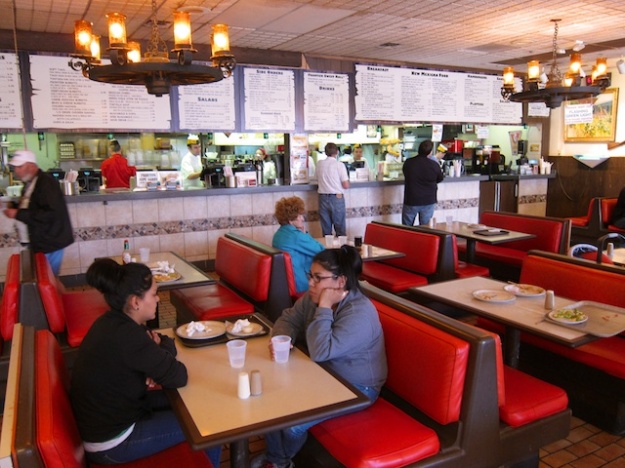 If you’re hankering for real, old-fashioned New Mexican chile, you’d best head over to Mary & Tito’s Cafe. Their cooks have been doing it right for decades, using Salem, New Mexico chiles unadulterated by powder or other fillers. This dedication was recognized by a 2010 James Beard award. They make a first-rate green chile but are famous for their red. To avoid being distracted by rice and beans, I go for an a la carte order ($7.50) of their signature carne adovada (cubed pork), which arrives as a mound of tender, slow-simmered meat covered in bright red, full-flavoured chile. The burn is intense but manageable, though beads of sweat are soon forming on my forehead. 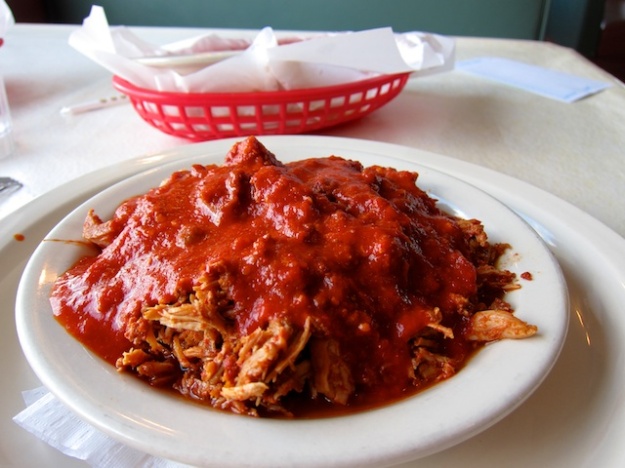 Mary & Tito’s, with classic dishes like this red carne adovada, is an Albuquerque institution