Normally, I just breeze past Salt Lake City, trying to get through the hour-plus gauntlet of freeway hell on the I-15 as painlessly as possible and avoiding rush hour at all costs. But at least once, you have to go into the city, visit the temples and taste the heart of the Mormon experience. Besides, lot of folks live in the ever-expanding suburbs, so things are often not as hectic in the downtown area as you’d think, and you can get around fairly easily, once you figure out addresses like 900 West 1400 North; what’s that all about?

There are a number of fine, affordable restaurants in Salt Lake City for road trippers, especially in the south part of downtown. “The dining and coffee culture in Salt Lake is blowing up. There’s a lot of good, eclectic food,” says Joe Evans of Nobrow Coffee Werks. “And it’s very casual. Nearly every place you can walk into in jeans and a t-shirt.”

The rainy Salt Lake City marathon is taking off across the road in Liberty Park as I pull up to a local breakfast institution, The Park Cafe. That should be me, I think, shedding calories instead of adding to an expanding waistline. But the smell of cooking eggs and hotcakes overwhelms my good intentions, and I walk into the bright, former house. The pancake sandwich—featuring four slices of bacon and two eggs—looks enticing, as do the thick slices of French toast and overflowing omelette plates at neighbouring tables. But in honour of the lean runners warming up outside, I stick with a lighter but still carbo-loading order of multigrain pancakes, the denser texture offset by liberal handfuls of blueberries and a topping of sugarless syrup.

Salt Lake City… a capital of third-wave coffee? In a state where most people don’t drink it. Who’d have thunk it? Yet at *Nobrow Coffee Werks, founder Joe Evans is expounding in passionate detail about his latest, expensive toy, the world’s first coffee-shop version of the Alpha Dominche Steampunk, manufactured right here in SLC by some folks also dedicated to snowboarding. “It gives us control over all aspects of brewing, from the temperature and filtering to the agitation,” says brewista Joe. The result is a custom-brewed cup, using beans from local Charming Beard and other high-end roasters. I must say, it’s a complex, lovingly-crafted coffee—a great partnership between man and machine.

Joe Evans and the very latest in custom-brewed coffee at Nobrow Coffee Works; I’d say this is high brow

Joe sends me on to what he affectionately calls the “coffee Nazi” at *caffe d’bolla, closer to downtown Salt Lake City. If anything, John is even more passionate about in-house roasting and a 19th-century coffee-making tradition known as syphon, or vacuum, coffee. I don’t have the 20 minutes or the $8-plus for this style of hand-crafted coffee. But another customer does order it, and I eavesdrop as John explains the long history of this technique and the perfect temperature (155 F.) for tasting the full flavour array of any coffee. In the meantime, my excellent $3 Americano is delivered, with an explanation of the three-bean blend and the melon and red apple notes I can expect to taste. The owners also travel to Asia annually to source top-quality teas. I take a pound of roasted coffee to go; it’s among the best beans I’ve purchased anywhere in the past couple of years.

After having my ID painstaking recorded at the door, I adjust my eyes to the gloom and enter Lucky 13 Bar & Grill. As advertised, it’s a dive bar, with a rock soundtrack and small, high tables, but too early in the morning for a Bloody Mary, at least for me. I’m here instead for the highly regarded burgers, though I can’t bring myself to try the recommended one with peanut butter. Instead, I go for the signature Celestial ($10), a big, meaty, juicy patty loaded with house-smoked bacon, caramelized onion and cheddar (hold the barbecue sauce). The included fries are hot and crispy and come with my first sampling of fry sauce, a tangy Utah staple that mixes mayo and ketchup.

*Finca is a decidedly more upscale spot in a gorgeous building, with large windows, gray decor and piles of wood for the grill. Finca specializes in tapas and small plates such as my beet salad—a work of art, with a velvety house ricotta base, a ring of beet chunks and a middle tower of argula topped by macerated strawberries and toasted almonds. Bigger plates include huevos benedicto, a lamb and pork meatball sandwich and a shrimp-and-calamari decorated Cobb salad—all done with panache.

This arranged beet salad, at Finca, is almost too pretty to eat… almost

Half the fun at *Tony Caputo’s Market & Deli is just wandering around, looking at all the meats and cheeses and dipping bread in the excellent olive oils and balsamic vinegars. This Salt Lake City landmark ages more than 200 farmstead cheeses in its cheese “cave”, has an in-house salami maker and sells more than 300 types of chocolate bars. Ask for a sample of their house-made burrata, a creamy, stringy mozzarella that comes wrapped in little green pouches. Of course, you’ll want to order one of their famous sandwiches; a half will suffice moderate appetites and costs less than $5. The award-winning Caputo is loaded with prosciutto, mortadella, salami, provolone, olive oil and balsamic, while the Muffaletta adds a spicier olive salad to the deli cuts and comes on a ciabatta roll.

Red Iguana is as authentic as old-school Mexican gets in Salt Lake City. This longtime favourite is colourful and crowded, with tables tucked into every cranny of the sprawling rooms. At prime times, there’s a lineup of folks waiting to dig into healthy portions of good Mexican food, including the Iguana’s legendary mole plates, which cost around $16. 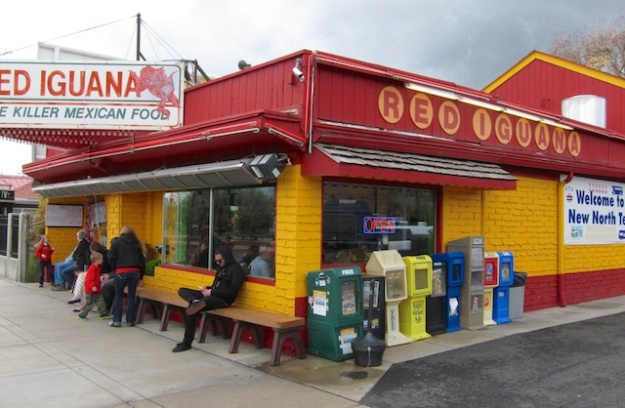 The flagship Mountain West Burrito (in Provo, just south of Salt Lake City) used to be a gas station. The only thing that could possibly give me gas now is the organic beans—which along with meat or veggies, brown rice, cheese and perhaps sour cream and guacamole is soon stretching a regular-sized burrito, and my stomach, with warm goodness. The jumbo is recommended only if I plan on running up a nearby hill overlooking Provo. Mountain West (“We do not own a can opener”) believes in using pasture-raised meats, making everything fresh daily and adding a little kick to the proceedings. In fact, the green chile sauce I pour over my burrito has more bite than anything I’ve had in New Mexico. My lower lip tingles as I drive out of town and back onto the interstate.

The name says it all: Mountain West Burrito