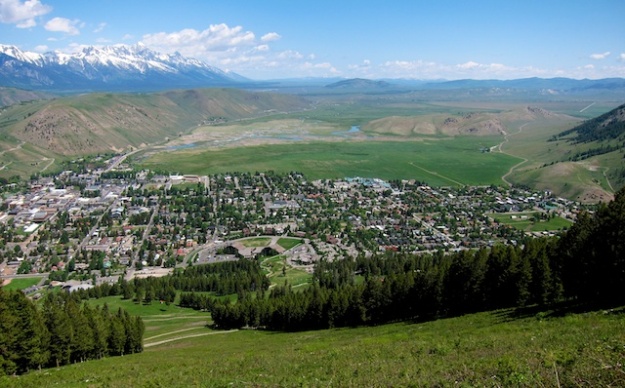 There’s undoubtedly a few billion dollars worth of properties in this view of Jackson Hole, Wyoming

Jackson Hole, Wyoming is my kind of resort community. Just kidding. It’s the first place where I heard the expression “the billionaires are pushing out the millionaires.” A glance at a glossy real-estate magazine reveals a number of $2-million-plus properties for sale and a 6,900-square-foot five bedroom mansion for a mere $4.99 million; heck, it’s on a 1.7-acre site. As JH Weekly notes: “Buying a home is prohibitively expensive for most of the non-trustafarian working class.” Needless to say, rents are sufficiently high that at least one wage slave recently spend a frigid winter camped in his car. Note: Jackson Hole refers to the whole community; Jackson is its principle town.

So where does this leave the budget-minded road tripper? Downhill skiing and golf are expensive, lodgings exorbitant in peak season. (Tip: Check the no-frills national forest campgrounds a bit of a drive from Jackson for reasonable rates.) Fortunately, it’s free to hike, bike or run the hundreds of miles of fine trails. While the dining’s definitely more fine than rustic, Jackson does have a number of first-rate, affordable eateries and drinkeries. Oddly, none of them appear in the resort dining guide.

Want to get healthy in Jackson, other than running up the surrounding hills? You’ll feel better just stepping inside *Lotus Cafe, a beautiful, calming space in a historic building with a stamped-tin ceiling.

I go the less adventurous route with a deluxe breakfast sandwich. But even this is leaps and bounds above conventional versions, with perfectly cooked egg, organic cheddar, baby spinach, ancho chili sauce and roasted garlic aioli, along with my choice of bison sausage (instead of marinated tempeh). Beautifully laid out on two square slices of wheat foccacia, it’s a fabulous, substantial breakfast for just $7.

The drink choices are even more impressive, with a long list of locally formulated Dragon Lady herbal teas served in cast-iron, Japanese testubin pots. One woman (a rock climber, naturally) is assiduously working a juicer for organic smoothies and juices. I could even order a carob and chicory “coffee”, in lieu of the real thing but, hey, I’m only willing to take healthy so far.

By the way, you might want to show up early to snare one or more of Lotus’s wonderful treats. The morning I’m there, all the almond butter thumbprint cookies are gone just after eight.

If you’re just looking for a jolt of caffeine, drop into the nearby Jackson Hole Coffee Roasters (50 West Broadway, opens daily at 6:30 am). Enjoy a pour-over or a pot of French press coffee while seated at a table next to the roaster. 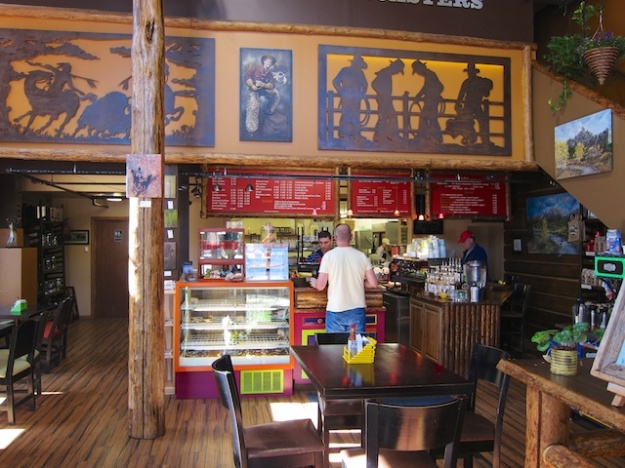 Can’t say I’ve ever tackled a sandwich at 6 am, let alone a turkey club that must weigh well over a pound, and cost only about $7. Yet when the doors at Creekside Market and Deli open at that hour, the fellows behind the deli counter are more than happy to start piling turkey, bacon, Swiss and all the fixings onto fresh sourdough till its almost blocking the rising sun.

I do have a strategy, other than simply yielding to temptation and digging right in. I’m going to earn this beast, via a carefully considered equation of calories burned equalling calories consumed. I thus embark on a brisk hike up the unrelentingly steep trail to the summit of Snow King, overlooking Jackson. I gain the 1,500 feet in under an hour but can still choke down only half this fantastic sandwich, which has remarkably maintained its shape on the sweaty climb. With a much lighter load, I head down, planning to reward myself with the other half when I reach the bottom.

Note: If you take the chairlift ($17 for adults round trip) instead of hiking, you’re only allowed a boiled egg, at least according to my formula.

Snake River Brewing is no doubt the most popular pub in Jackson, brewing several styles of beer on the premises. Wash the suds down with burgers from local meats or choices from an $8 lunch menu. At dinner, friends love the grilled Idaho trout, served on an almond, roasted tomato, Brussels sprouts and potato hash. 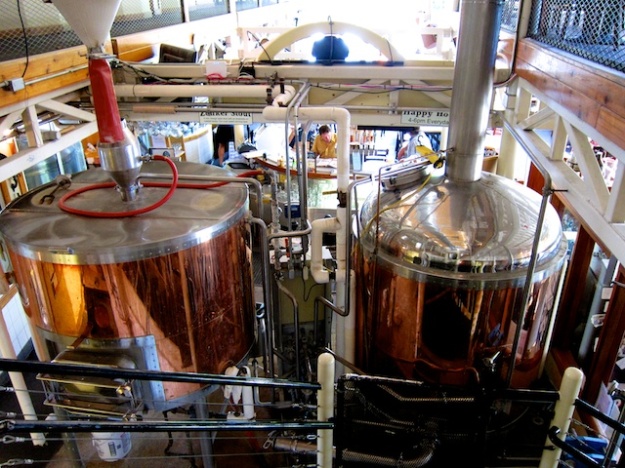 How about a dip in the Snake River Brewing tanks?

I wish the owners of the *The Bird weren’t so wishy-washy. I mean, they only devote a full, tightly spaced menu page to how customers should order the burgers and steaks at their pub, just south of Jackson. To summarize, said meats should be ordered medium (pink throughout) at most and preferably rarer. Well done is just the “wrong decision.” 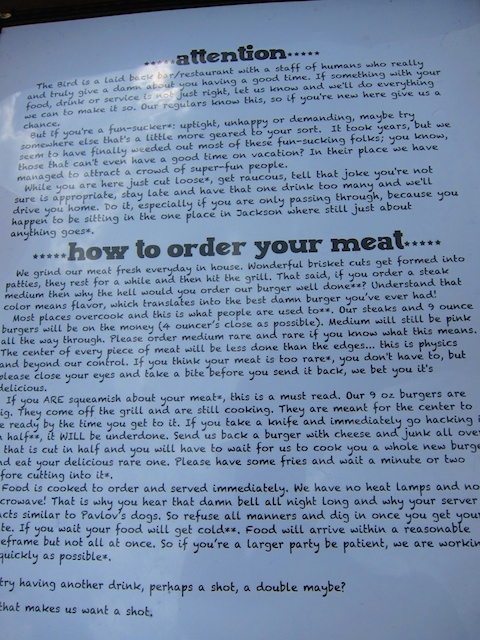 The “rules” at The Bird

I admire an obvious passion that begins with the daily grinding, in house, of fine brisket cuts for the burgers. I agree it’s simply a waste of good meat to cook it to a flavourless shoe leather, and the Birders aren’t shy about pointing this out.

From a roster of more than 20 burgers (including one with no distractions, just meat), I choose a Shue, cooked a perfect medium rare and topped simply with grilled onions, American cheese and a runny egg. It’s sufficiently great that the salty fries, while good, hardly seem necessary. Maybe I should have replaced my four-ounce patty with a nine ouncer, though, at a neighbouring table, the latter seems to overwhelm the English-muffin bun.

A simple brisket burger, cooked medium rare, hits the spot at The Bird

On a nice day, it’s worth savouring a burger and beer on The Bird’s lovely deck, which overlooks a Snake River valley framed by peaks. A final bit of sage advice from the menu: “We are not a short-order kitchen. Relax and enjoy yourself.” 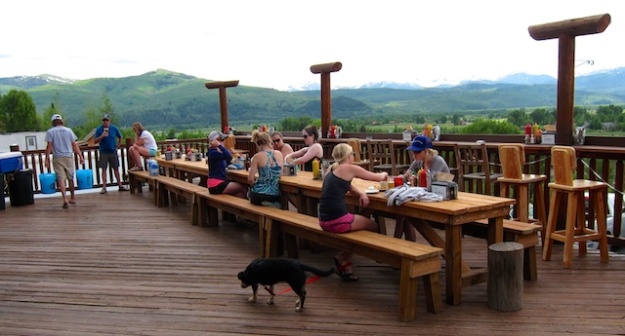 Why would you hasten your eating and imbibing with this view?

The Bird
4125 South Pub Place (South Highway 89), Jackson Hole, Wyoming
Monday to Saturday the bar opens at 4 pm and the kitchen at 5 pm, Sunday 10 am