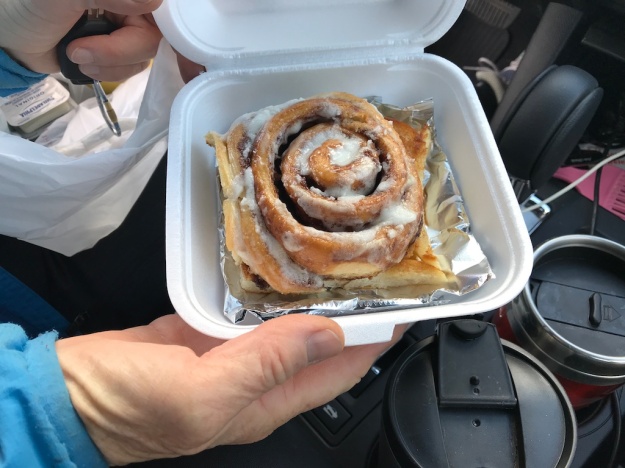 Over the years, I’ve eaten a lot of cinnamon buns; that’s cinnamon rolls if you’re American. Indeed, I have recipes for two classic Edmonton cinnamon buns—the Tuck Shop’s and Mayfair Golf Club’s—which perfected the mix of gooey goodness, without being overly bready, and without any of that nasty icing.

But en route to a recent backpack in northern Canada, I twice encountered something I hadn’t seen before: toasted cinnamon buns. These were both offered at hotel restaurants, one in Beaverlodge, Alberta and the other in Tumbler Ridge, B.C.

I can see how toasting could improve a cinnamon bun that was a day old or a little doughy. And it’s one way of reheating them without resorting to a microwave. I didn’t see how these ones were prepared, though I assume they were sliced horizontally and toasted in some kind of oven. 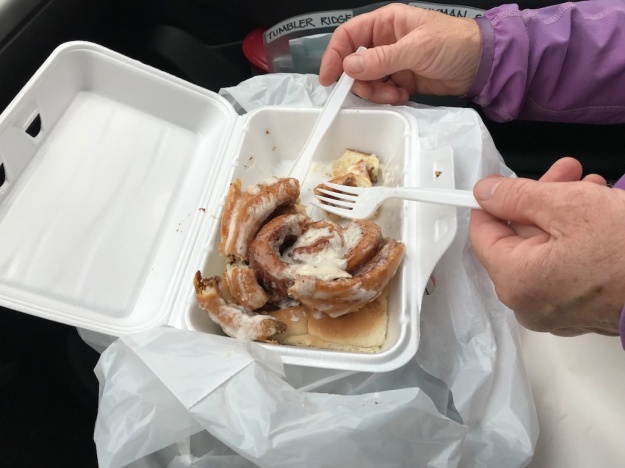 Despite all the packaging, our favourite toasted cinnamon bun, at Tumbler Ridge Inn Restaurant

We got them to go, which may not have been the friendliest thing for the planet. They emerged from the kitchen each in large white plastic bags containing a cinnamon bun in a Styrofoam box, four packets of butter and, in one case, several packets of cream cheese. They were then attacked with plastic knives and forks, as well as fingers.

I’m not sure how many calories were consumed in this starch-sugar-fat feeding frenzy. It’s a good thing seven hours of hiking ensued.